How To Use This Encrypt64 Converter On Your Blog

Click on the code and CTRL + C on your keyboard. Put this code before the </body>,

Now you can get this theme. Please, visit this post Encrypt64 Converter Responsive Blogger Template With Bootstrap.

All I saw was a cloud of dust. At some point during my 575-mile drive of the 2016 McLaren 650S Spider, I sort of became immune to gawkers. Phones snapped hundreds of pictures and videos, so I imagine I'm semi-famous on exactly 200,000 different Twitstagram accounts by now. But then a kid so intent on capturing my green machineactually drove off the road. Thankfully, he regained control, and in the process was hopefully taught a very important lesson about distracted driving. Probably not.. 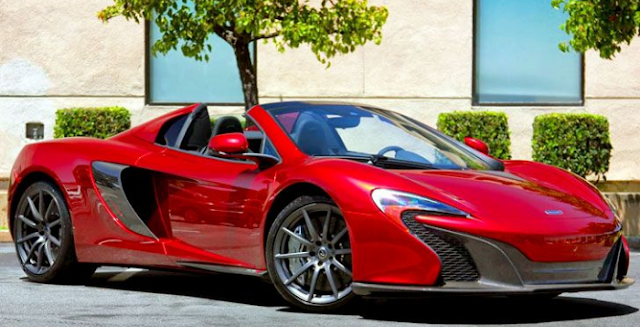 That's what happens when you drive a bright green McLaren through the heartland of America: everyone takes notice. Car enthusiasts or not, every single person I passed in the 650S gave it a second look. Usually they just stared and stared. Or honked. Or tried to race me (and lost – dummies). My road trip was a 575-mile-long case of distracted driving, and all I can say is, "sorry, not sorry."
It all started over dinner in New York. I told our McLaren guy that he should send a car to Detroit, and instead of hiring a transportation company, should just let me drive it over. Next thing I knew, I was on a plane to Baltimore with intrepid video producer Chris "Roy Rogers" McGraw, where a $350,000-plus, Mantis Green 650S Spider would be waiting for me by the BWI airport rental car plaza. McLaren cars enter the US through the Port of Baltimore, so it felt right picking up the car there, instead of in New York. Plus, driving this thing through Manhattan seemed like a massive pain in the ass.

No car I've ever driven could draw a crowd like the 650S. It's not uncommon to see supercars rolling through big cities – people don't bat an eye if one drives by in Los Angeles. But in the country, it's a sight to behold. Say what you will about Mac's derivative styling, I think the 650 looks killer. And so did everyone who stopped me on the street.
What I found most interesting was, just saying "McLaren" was enough to really draw people in. If they're familiar with the British marque, they haven't heard the name in a really long time. And if the word doesn't ring a bell, they want to know what it's all about. "It's not a Ferrari – it's a McLaren," one guy said to his wife at a rest stop. The brand recognition might still be lower than McLaren would like – everyone instantly thinks it's a Ferrari or Lamborghini – but everyone I met took this car very, very seriously.
And you have to take it seriously. It's a freaking supercar. Nevermind the way it looks, how much it costs, or how many kids will run up to it in a parking lot. On the road, this is one of the most impeccable machines I've ever driven. Ever. In terms of memorable motoring experiences, this 650S will stand out – and not just because of its color.

No, there's not much to set the 650S apart from its supercar kin in terms of how it stacks up on paper. There's a twin-turbo 3.8-liter V8 right behind you, making 641 horsepower and 500 pound-feet of torque. You manage the power with a seven-speed, dual-clutch transmission. Perhaps the most notable part of the 650S setup is that it uses rear-wheel drive, whereas most supercars have moved to all-wheel-drive setups. But what gets me about this car is how dramatically its personality can change.
Day 1 of the road trip was mostly about getting some beauty-roll shots and general drive impressions – in other words, lots of freeway stuff and curvy backroads. Not exactly supercar territory, but even here, the 650S was a peach. In its standard setting, the suspension is so supple and nicely balanced that the car will happily eat up highways and side roads without breaking your back. It is honestly the most amicable suspension setup I can recall. To put it in perspective, I once drove a Nissan GT-R for 300 miles straight and emerged nearly deaf and in desperate need of a chiropractor. I put the same amount of miles on the McLaren and after a quick stretch of the legs, was ready to do it all over again.


Encrypting your link and protect the link from viruses, malware, thief, etc!
Made your take this link to visit.
But just as this car is quiet, refined, comfortable, and smooth, it can be a full-on assault weapon. Three drive modes are available, for both the handling and powertrain – Normal, Sport, and Track. I didn't use the latter, because I didn't track-test the 650S, and I'm not one of those guys who thinks you have to ditch the traction control and put a car in blast-off mode to see what it's like on a public road (that's not safe, friends). With both the handling and engine set to sport mode, the 650S stiffened up, hunkered down, and used the full might of its twin-turbo V8. With launch control, the 650S Spider will scoot to 60 miles per hour in under three seconds, and with the engine directly behind your head, it accelerates in a fury of noise and woosh and holy-crap-this-thing-is-quick.

At 3,250-ish pounds, the 650S Spider weighs about 100 pounds more than a Volkswagen GTI, but has 400 more horsepower. And with its slick aerodynamics, it slices through the air with supreme downforce and stability, including when you mash the brake pedal and the giant air wing flips up in your rear view mirror. As quick as it is moving forward, it's just as urgent when slowing down. And there's no drama from the front end – everything remains stable, poised, and with minimal body motions. That's how the car tackles corners, too. There is this sharp precision from the front wheels that communicates through the carbon fiber tub and up to the seat of your pants, while the steering wheel provides just as much feedback to your arms. You feel completely in touch with every move the McLaren makes. It's brilliant.

This all came flooding into my mind while navigating the winding roads of southern Pennsylvania, plowing northwest toward Ohio. Get off the turnpike, explore a bit, and you'll find some truly scenic roads that connect tiny mining towns. Hills, twists, and turns abound, the 650S was at home on these scenic roads. And despite McGraw yelling at me through the walkie-talkie to slow down so he could film, I couldn't resist pushing myself to take each turn faster, brake later, and trust that the car's fantastic suspension would treat me just as nicely in Sport mode as it did while highway-slumming in Normal.


Pulling into a Pittsburgh Holiday Inns that night, I felt a great sense of knowledge about the car and its abilities. And I also came to a huge conclusion, or rather, a piece of advice – if you're planning on using the 650S as a cruiser, do not buy the fixed, carbon fiber racing bucket seats. Even skinner-than-me McGraw noted that these thrones, while hella supportive and easy to adjust, aren't exactly accommodating to the wider-hipped among us.
That said, the rest of the 650S' interior is lovely. There's a bit of learning curve to the controls – most vehicle functions are managed through the IP, via a thin stalk on the lower, left side of the steering column. The vertical screen down the center console is where you'll find the infotainment system, and it's got all the usual functionality. It's not particularly pretty or intuitive, but it works. Beyond that is the engine start button, drive select toggles, parking brake, and large-print selectors for Reverse, Neutral, and Drive.
Forward and side-to-side visibility is great. You can see how the nose slopes down, and you know what's going on to your left and right. As for what's behind you, best to just not worry about that. Folding the Spider's roof back takes a matter of seconds, and happens with the flick of a switch inside the cockpit. The roof comes apart in two sections and stows neatly behind the passenger compartment. There's even a power windscreen that closes the gap between the two intake buttresses, making the cabin relatively pleasant for holding conversations, or in my case, for yelling at McGraw on the walkie-talkie.


The first half of my journey was all about learning the car, showing it off on camera, and experiencing some of Appalachia's best backroads. Day 2, on the other hand, was a rainy mess where the focus was simply on getting the hell home. Eighty-five percent of all roads in the state of Ohio are flat and straight, so aside from some aggressive on-ramps and slow-down-then-speed-up-super-quick runs, the McLaren once again had a chance to show off its balanced composure in Normal mode.


It also rained like the dickens for about four hours straight, which not only killed some video time, but made for a gross commute down the Ohio Turnpike and Route 2 along the coast of Lake Erie. Even so, in the super-wet conditions, the 650S was a breeze. Balanced, comfy, quiet, and stable – the same attributes I found in b-road-attack mode were present here while doing 65 miles per hour through heavy rain.
The sun came out, and rural Ohio brought more gawkers. So if you're going to do a road trip in this car, there are two things to keep in mind. First, prepare to make a lot of new friends. And second, prepare to add an extra 10 minutes to every fuel stop, because you will instantly have a crowd.

Driving a car like the 650S through rural areas, the heart of the Midwest, and scenic roads of mountainous areas taught me a lot. It taught me that McLaren can build a supercar as good as or better than any of the competition. You really can daily-drive this thing – especially if you love attention.


I cannot stress enough how enjoyable this car is to drive in every single situation. It's comfortable and quiet in the city. It'll soak up miles on the freeway. And on properly good roads, it's an immensely rewarding car that works with you, and never feels like it's coming around to bite you. I would drive it over and over again, and my good experience with the 650S Spider leaves me very optimistic about the cars McLaren has coming down the pipeline.